It’s that time of year where we all look forward to seeing KS1’s ‘Hosanna Rock’ nativity! As the lucky UJs sat there watching the infants perform, it brought back lots of cherished memories and many of us were singing along to the songs, which we remember so well. Everyone had to use all of their Superhero Values and show extra bravery when performing in front of the rest of the school. The Upper Juniors wish KS1 all the best when performing to their families this week.

Here’s what the Y6s thought about the wonderful nativity. 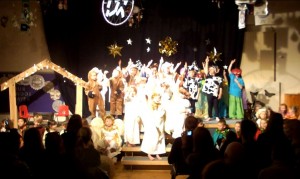 by Daisy and Katie